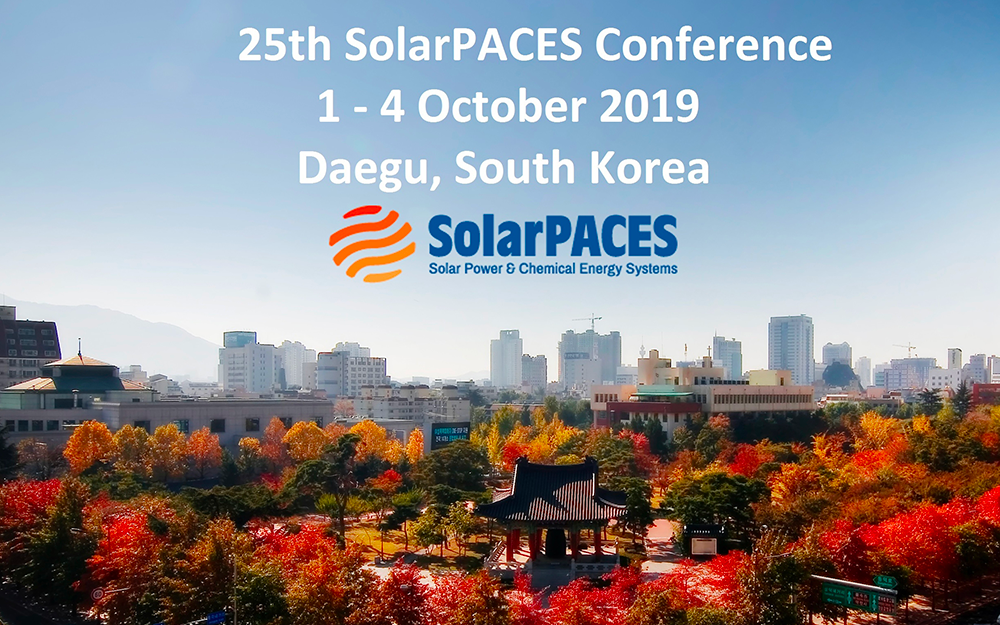 Next-CSP participated in the 25th edition of SolarPACES, which took place in Daegu, South Korea from 1 to 4 October 2019.

On this occasion, Next-CSP partners made four presentations about the project, which feature in the SolarPACES Conference Proceedings published in December 2020:

Abstract: In this work, it is investigated about the application of an Integrated Solar Combined Cycle (ISCC) that uses particles as heat transfer fluid at the receiver and as the storage medium to provide flexible electricity dispatch without any supplementary gas burning. The paper investigates two cornerstones’ of concentrating solar power technologies (CSP); i.e., the application of highly efficient power cycles and the ability to meet grid demand throughout flexible dispatch strategy. Using particles for the solar loop allows meeting both requirements at the same time. On the one hand, very high temperature can be achieved on the solar receiver which enables the use of highly-efficient power cycles according to thermodynamics second statement. On the other hand, particles ease for handling and storage makes them suitable for thermal storage at CSP applications which results into flexible electricity dispatch of the power block. Results shown in this paper prove the feasibility of flexible electricity dispatch of particles-based ISCC following real curve demand.

Abstract: This work is part of the European project “Next-CSP” which aims to develop a next generation of concentrated solar power plants using the particle technology and, particularly, the fluidized particle-in-tube technology working at high temperature (>700°C). A 3MWth pilot unit including a solar receiver, storage tanks, a heat exchanger and a gas turbine is under assembly at the top of a solar tower (Themis-France) to demonstrate this technology. The unit will use the fluidized particle-in-tube solar receiver concept. The scaling up of this concept needs researches on the gas-particle flow structure evolution along the tube and on wall-to-fluidized particles heat transfer. Therefore, several experimental set-ups were implemented to study the particle flow and heat exchanges in order to define the best operational conditions for the full-scale 3MW test unit. The first one is a cold experiment with three 3m-long transparent tubes implemented to study the stability of dense particle suspension (DPS) flow in tube and the flow distribution between the different tubes. 3m is the length of the solar receiver tubes. The second one is an on-sun experiment equipped with a one meter-long finned tube to collect data on the distribution of wall surface and particles temperature, thermal exchange and thermal performance useful for further modelling and up scaling. Experiments with the cold mockup indicate that stable particle flowrate ranging from 10 to 340 kg/m2.s (0.015 to 0.53 g/s) can be obtained per tube with mean particle volume fraction in the range 0.29-0.36. Solar experiments with finned tube designed to increase the heat exchange between the particle suspension and the irradiated tube result in rather constant values of the heat transfer coefficient at about 1200 ± 400 W/m2.K for particle mass flux between 40 and 110 kg/m2.s.

Abstract: This paper describes the backward-gazing method with four cameras optimized by using different process of data treatments. The method could be useful for the heliostats characterization in a Solar Tower Power Plant (STPP), to detect heliostat pointing errors, mirrors canting and waviness without disturbing the daily electricity production process. The method is based on the use of four cameras near the receiver, all pointing to the heliostat to be characterized, and a fifth one taking images of the Sun. The theoretical principle is explained and different kind of data treatment process are tested and compared by using heliostat images from numerical simulations. Each process model is explained and the software used for simulations is described. The achieved accuracy of the best results is estimated to less than 0.05 mrad RMS in term of surface slopes.

Abstract: This paper discusses the usage of sbpRAY for the optimization of a cavity receiver. New features have been implemented into the program for this purpose. A case study is presented which combines sbpRAY with Rhino and Grasshopper. The example is taken from Next-CSP, a research project investigating a high temperature solar thermal power plant with a cavity receiver which uses solid particles as heat transfer medium and as a storage material. The influence of several parameters on the output variables is investigated.