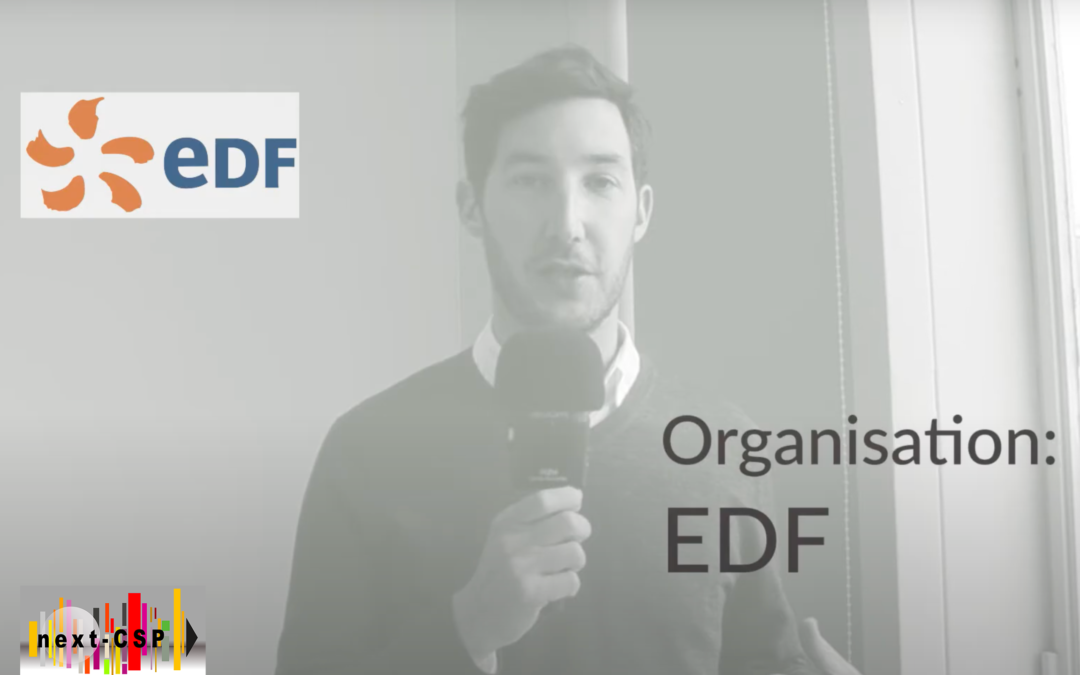 Discover the people behind Next-CSP in our interview series in video. Meet Jean-Florian Brau, from EDF R&D (France) who explains his role in the project, challenges and next steps.

You can also find all the partners interviews in the Communication materials section of the Next-CSP website.

Can you tell us a bit about yourself ?

My name is Jean-Florian Brau, I work at EDF R&D. I’m responsible for the R&D activities that we’re doing on concentrated solar power, or CSP. One part of my activities is to oversee what we’re doing in our participation in Next-CSP.

What’s your role in Next-CSP?

The role of EDF in Next-CSP is to be the future user of the technology. If a CSP plant is to be built, then EDF would be the one to pay for it and then the one to use it. So in this aspect, our role is to imagine what it would look like in a commercial scale, so the next steps after the prototype and the demonstration scale. We’d like to take into account all the challenges and the potential problems that could arise when scaling up the technology at the commercial scale.

Why did you decide to take part in the project?

There was a previous project before Next-CSP: the CSP2 Project. The results of this project were interesting, so that’s one thing. We believe in going to higher temperatures at the receiver for the CSP tower technology. To this end, using particle fluidised beds is an interesting and promising way of doing this. This is why we decided to take part in this project: first, to help building the proposal and then to help by bringing our expertise and our user point of view during the rest of the project.

What are the most challenging aspects of your role?

One of the challenging aspects is to have in mind what could be the problems and what would be the constraints of a commercial scale plant. Of course, the most interesting results of the Next-CSP Project will be the demonstration: What happens in the prototype? What results, performances? What problems can we solve? But then of course, the next step before commercialisation is to scale up the technology and to use it at 100 or 150 megawatt electrical. Our role and the main challenges are related to this. We have to imagine and anticipate the problems that could arise when scaling up the technology. We also have to make sure that what we’re doing today will be relevant in 10 to 15 years when the technology will be able to be deployed at commercial scale.

What success has been achieved since the beginning of the project?

There has been a lot of success in the Next-CSP project. A lot of experiments where realised. We have a much better idea today of what the commercial scale plant will be and what its performances could be than we had at the beginning of the project. We think part of this is thanks to what we’ve been doing at EDF. So we’ve started to think about the commercial scale… We integrated all the different parts of the system together as well as all the different results and simulations from all the partners to build a system level model and to be able to say, “If we scale that up to 100 megawatts this is how the performances would be.” We were also able to pinpoint areas of the plant where we should achieve better performances or where we should solve some issues to be able to make it more relevant in the future.

What should be the next steps after the end of the project?

We think that one of the next steps would be to have a demonstration system that includes all the particle conveying systems, both the vertical and horizontal conveying. Because that’s one of the areas where we see there’s room for improvement and where we should improve the concept for it to be really competitive economically and also from a performance point of view. I think the meetings we’re having these two days in Thémis are really interesting because we get to see the actual installation and the actual components of the prototype that are being assembled and will be used in the project. So it helps, especially for us at EDF: we haven’t been involved in much of the experimental work until today, so it helps us to get a glimpse of the scale of the project and of the components. It also helps bringing everyone together around the prototype and that’s always a good thing to have all the constraints in mind and to be able to see where we’re going as a consortium.